Saint Longinus the Centurion. Photo taken in Saint Peter’s Basilica, Nov. 2014. If you look closely you can see bees sculpted into the pedestal. There are many of these Saint Peter’s…. a subject for an upcoming post.

Many Catholics are writing about “Why I Remain Catholic.” Besides the good answers given elsewhere, here is one reason of mine: for the funerals. I came into the Church in the Easter Vigil of 2012. A year or so ago I attended a funeral for a man in the parish whom I did not know, but whose wife I knew. I had never seen a Catholic funeral and did not know what to expect. So what follows are my impressions of what I saw, being a Catholic but still a very new one and one who did not grow up in an environment with any Catholicism near it.

This was a funeral Mass, not a Requiem Mass. The casket was brought to the front of the church, to rest at the base of the lit Baptismal/Paschal candle. What a symbol, to remind us of the man’s baptism and ours, and of the Resurrection. The vestments in this case were white, also a reminder of the Resurrection, and instead of a big spray of flowers made by a florist, the casket had a pall, a drape of the same material as the priest’s vestments. I don’t think I had ever seen a drape that wasn’t a flag. 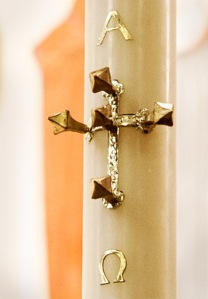 I learned that some funerals are done with violet or even black vestments, which is not cheery, but does have great significance. This funeral was radiant with hope, but even if this were a more old school funeral with black vestments and the reading of the Dies Irae, either way, one of the most striking things to me, and the more striking the more I think about it, is the assured continuity of life. One more beautiful thing is that the beauty of the funeral would be the very same for any parishioner, the rich or the poor, and that is as it should be.

The priest took his time and much care in incensing the casket. It is always so beautiful to see and smell and it is similar to can occur in every Mass (at least a Mass for a Solemnity or Feast).

There was a brief homily, but it spoke more of the hope of the Resurrection than of the deceased person. Apparently the wake is the time for stories, reminiscing, and so on – I didn’t go to that. The funeral was to celebrate Mass, to pray for the soul of the deceased, and to keep the minds of the rest of us well fixed on the mystery of death and the greatest work there ever was, Christ’s merciful sacrifice for us.

The Catholic Church has spent twenty centuries thinking about life and the life to come. We know in part and see in part, of course. But the Church has the concept of church suffering/militant/triumphant. In the funeral Mass we, the church militant, hear about the saints triumphant (“Peter and Paul, Andrew, James and John, Thomas, James…”) while in the presence of the body of the deceased, who we believe to have seen Jesus, though we do not presume to say for sure what the state of the deceased’s soul is after that; and we wonder about the church suffering. It is mysterious. But at Mass we all meet, and worship with angels and archangels. In the august Roman canon we pray that our departed loved ones will be granted a place of refreshment, light, and peace. It is a great blessing to live and die in the church. She is a mother and cares for her sons and daughters with a mother’s care forever. Her priest sons, if they are faithful sons of the church themselves, guide the souls in their care to the point of death, then commend and entrust them finally to God.

The beauty, mystery, assured thinking and astonishing continuity of time on display, the prayers of the Mass, some going back to about 400 AD…. I can only say if all Catholic funerals were like that one and people could see that and get a sense of in what dignity the Church holds the body itself, conversions would happen!

At last after Mass the heavenly In Paradisum (translation) was sung and the body was taken out of the church. I didn’t go on to the cemetery.

At the risk of bringing down the rapturous tone of this post, I must contrast this all with another funeral I went to at roughly the same time. This was for the parent of a friend, and it was in a church of a mainline Protestant denomination. Some basic hymns were sung, some nice Psalms and other scriptures were read, and there was a brief sermon which did touch on the hope of the Resurrection. It was all appropriate and inoffensive, not full of fluff or undignified. I think the casket was not there. The chapel was small and there were some flower arrangements. There was a reception afterwards in the church hall, where I made small talk with people I didn’t know. Nothing wrong in all of that.

But what was missing was 20 centuries of tradition, of a priest (who was ordained by someone who was ordained by someone and on back to Peter) conducting things and not improvising, a sense of the saints being near, the physicality of the body of the deceased itself… in short, the sense of being in the unbroken Church, a Church that has spent twenty centuries cherishing and thinking about her saints, men and women – the great saints blazing with valor visible to all but also the small and hidden saints, ignored by most but aflame with love for Christ; a church that doesn’t nervously hide away her dead but sometimes puts them right up front in glass cases for all to wonder at; a church that takes her time to sit and ponder over the mystery of why God made us and how he stepped into time to redeem us. This is the church I belong to and is one of many reasons why I remain Catholic.

Post Script: this is not unrelated to the events of the past week, i.e. the recent Supreme Court decision. To those who would remake society because they think we have too narrow a view of them, I say, you have much to narrow a view of yourself. Try going to a well-done, traditional Catholic funeral (it need not be the Extraordinary / Tridentine version. What I described here was the Ordinary form). Listen and look and consider how God must regard men and women. He knows us and intends us for everlasting life, for glory, if we will follow him. Compared to that, our own thoughts about ourselves are so tiny and crabbed, so limited. Nothing like attending a great funeral to shake us out of that! This man whose funeral I saw not only had a soul that we should pray for but had a body that mattered, and that continues to matter. The matter of it was made by God and one day please God it will be raised into a glorified body. This idea still is a nonsense or a stumbling block to many as it was in Saint Paul’s day, but truly it is the opposite of a church that wants to keep people down!

…preserved in a tile, from Roman Vindolanda, near Hadrian’s wall. An honest-to-goodness footprint, “…of a right foot, thought to be comparable with that of an adolescent has been dated to 160-180 CE.”

…and meditate on the life of Christ, while saying your rosary. It will bring peace. Some great quotations on the Rosary here, from St. Peter’s List.

We have three new priests in the Richmond Diocese, and the Diocese has created a lovely and touching video of their ordination. God bless priests!  See the video linked to here: